FOR IMMEDIATE RELEASE No. 3114

Will improve energy efficiency and reliability of generators

TOKYO, May 24, 2017 - Mitsubishi Electric Corporation (TOKYO: 6503) announced today the development of what it believes is the world's-first technology for determining the operational status of power generators using electromagnetic-field analysis of up to an unprecedented 30 million meshes and coupled-numerical analysis. The new technology will help improve generator performance by reducing loss, raising cooling efficiency and reducing vibration, etc. for strengthened reliability, ultimately to enhance the stability of electricity supply. Mitsubishi Electric will use the new technology for its current VP-X Series turbine generators and future models. The company also aims to combine the above technologies in a comprehensive system that provides full analysis of generators by around 2020. 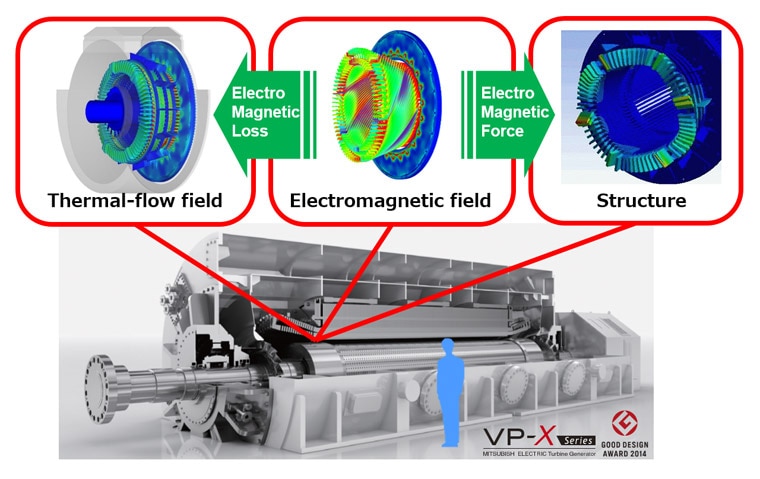 The technology analyzes the interaction between electromagnetic-field and thermal-fluid-flow-field, as well as the structural configurations of power generators, enabling the detailed distribution of temperature and vibration to be calculated based on detailed loss distribution and electromagnetic force.


Further, the technology enables detailed calculation and mapping of temperature distribution and deformation by using coupled analysis of the generator's electromagnetic- and thermal-fluid-flow-fields and structure.


Additionally, Mitsubishi Electric used the data generated with the new technology for analysis of the initial condition of thermal fluid, making it possible to calculate the detailed temperature distribution inside a generator. Also, structural analysis based on the electromagnetic-force data, as well as analysis of vibration throughout the generator, can be used to determine which kinds of sensors cannot be installed due to a high-noise, high-voltage and/or high-vibration environment.

Comparison of New and Existing Technologies